Since Chloe left for the royal capital, The Royal Girls’ Academy had become a hot topic in Atwood territory.

The villagers seemed to think that Chloe left for the sake of the Atwood family.

（I feel bad for the villagers who misunderstood, but both Chloe onee-chan and me want to go to the Royal Girls’ Academy because we want to leave this territory so badly.）

Mylia was now eating Dabola meat in the reading room after practicing magic.

（Now that I’ve finished practicing magic, I wonder what should I do next…）

She usually went to the fields to help Chloe pick lavender at this time.

Mylia used clairvoyance and looked over the lavender field.

She knew she wouldn’t find Chloe there, but she did it anyway because she felt lonely.

She found Alex in the field instead.

She then used magic to make Alex slip and fall into mud.

After she pranked Alex, she looked in the northern forest direction.

（I wonder what Master is doing… Never mind, she must be sleeping now.）

（Anyway, I have to keep practicing magic and carry on the ‘All-you-can-eat yakiniku’ plan. Yosh!）

Mylia took out a piece of paper and a pen from her magic bag and wrote her plans.

There were no sushi or shabu-shabu restaurants either.

There were only French-like restaurants where bread was the main menu.

Of course there were restaurants that serve grilled meat.

However, the ‘all-you-can-eat yakiniku’ restaurant for Mylia was the restaurant like Jojoen.

*/Jojoen is one of the famous Japanese yakiniku restaurants

Mylia wanted to once again eat high quality meat with the delicious yakiniku sauce as much as she wanted just like when she visited Jojoen with her grandma in her previous life.

Perhaps because she always ate poor meals, she became more passionate about food than before.

（I’m planning to prepare myself for the exam next year. I still have a lot of time but I don’t want to waste it so…）

Mylia looked at the plans written on the paper.

She had a lot of things to do.

（Anyway, let’s fly to the forest!）

Mylia put the paper and the pen in her magic bag and approached the window.

Now that the lavender harvest was over, the villagers were busy making millet.

They really tried hard to cultivate the poor soil in the Atwood territory.

（Sonar activated!…… Alright, there’s no one around. The poor merchant’s son, the lolicon, and the demon queen are far away.）

After confirming that she was good to go, Mylia jumped off the window and started flying with magic.

（Most likely Master is sleeping now. I don’t want to disturb her so I think I’ll stay away from her house.）

Mylia flew slowly at low altitude while observing the surroundings, and then she raised the altitude once she moved away from the village.

She put her hand over her forehead to block the sun and kept flying until she reached the forest in the monster territory.

Mylia was now flying above an unexplored area.

（Sonar activated!…… Giant snakes, big monkeys, crocodiles, and… dinosaurs…? There are quite a lot of monsters here, but… Umm… there’s no cow-like monster, huh? Speaking of cows, Amnesia said there are farmers who keep cows in Hamanulle, so even though I couldn’t find cow-like monsters, I still have a way to get meat for yakiniku. Alright, let’s keep going.）

Mylia used compass magic and changed her direction to the north.

The forest continued beyond the horizon.

（I should also look for materials to make the equipment. Speaking of grilling, ‘shichirin’ is the perfect equipment, so I think I’ll look for iron too.） 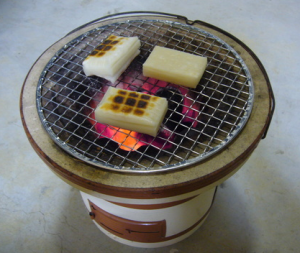 Mylia wanted to prepare everything perfectly for the sake of her dreams eating delicious yakiniku.

She is a girl who works hard once she decides something, especially if it’s related to food.

（Sonar activated! Let’s try searching for the radius of 20km for now.）

Mylia activated sonar magic once again but this time she made it only react to iron.

The ripples of magical power that spread 360 degrees from her body caught a small reaction on the south side and a big reaction 15km to the northwest.

（The reaction on the south side must be from the agricultural equipment in the village, so northwest, here I go!）

The scenery changed at high speed when Mylia sped up to the northwest.

She lowered the altitude a little, and her small shadow reflected on the trees in the forest.

She felt free when she was flying alone like this.

There was no muscle-brained father, no demon queen older sister, and no lolicon brother in law.

Even though she was lonely, she wanted to enjoy these two years without Chloe as much as she could.

（If I keep whimpering, Chloe onee-chan will be sad after all!）

Manipulating her magical power, Mylia made a loop maneuver in the air.

While her dress made a loud flapping sound, she saw the sky, the forest, and the sun rotated vertically.

She felt a floating feeling for a moment when she returned to the original direction.

（I’ve never been to an amusement park, but I wonder if this is what it’s like to ride a roller coaster.）

After flying for a while, Mylia reached the area where her sonar reacted.

There were a lot of black rocks that looked like solidified lava in the forest below her.

（Ohh, those black rocks are iron lumps, right? Looks like there are no monsters around here. Alright, let’s name this place “Iron Area”.）

Mylia got down and touched one of the iron lumps that was five times as big as her.

（Hmm, I can’t use it as it is… I have to smelt it first. I also have to take out the impurities mixed in the iron. If I remember correctly, the elemental symbol of iron is ‘Fe’, right?）

Mylia tried to remember what she had learned at school in her previous life.

She cut the big iron lump into the size of a volleyball, placed it on the ground, and used appraisal magic.

（I see. Looks like it’s about 80% iron. I only need a little so I’ll just spread my magical power into it and use transfer magic to move only the iron… Alright…… Mmm…. Mumumu………..This is really tiring……）

However, she had a tenacious personality.

She continued to concentrate without giving up.

After two hours of doing that, she only managed to collect enough iron to make a golf ball.

While breathing heavily and shouting like that, Mylia sat down on a rock near her and took out one skewer of Dabola meat from her magic bag, taking a break.

She made thousands of Dabola meat skewers at Titania’s house, so she had plenty of stock.

The beverage was only water in a bamboo tube.

Thinking like that, Mylia looked up at the blue sky.

Her light purple hair swayed in the wind.

She was unaware that because she used a tremendous amount of magical power, there were no monsters that dared to get close to her.

Also, she had no idea that refining iron with magic like she did was very difficult even for Titania who was good at controlling magical power.

（Chloe onee-chan… I hope she arrived at the royal capital safely… Well, Amnesia is with her, so I think she’ll be just fine.）

While looking at the sky, Mylia prayed for Chloe’s safety.

Chloe was now just one day away from the southern city of Hamanulle.

Because there was only one road to the royal capital, they had to go to that city first.

Amnesia brought a scent bag to keep monsters away, so their journey went smoothly.

Actually, that scent bag was a very valuable magic tool that once you bought it, you would think that 100 gold coins was nothing.

「Oh, by the way, there’s something I want to ask you.」(Amnesia)

「You haven’t taken a bath during this trip, have you? So, why are your clothes not dirty at all? Normally, clothes will get dirty from sweat, right? But your clothes still look as beautiful as new.」(Amnesia)

「Okay… Have a nice sleep.」(Amnesia)

Amnesia was curious about that, but even though she wasn’t satisfied with Chloe’s answer, she went into her tent anyway.

She didn’t realize at first but after Amnesia asked her about her clothes, Chloe became curious too.

She took out the shirt she got from Mylia from her bag and lit it in the moonlight.

It was almost not visible but she could see a magic circle drawn on the shirt.

It was quite a complicated magic circle. She had never seen a magic circle like that in a book before.

She then checked the other clothes and found the same magic circle drawn on each one of them.

Those magic circles were drawn almost invisibly so people couldn’t see them unless they looked at the clothes very closely.

Chloe found out that the clothes Mylia gave her were not ordinary clothes.

They were designed to be hard to get dirty.

However, she couldn’t show those clothes to other people too much.

She thought it would be bad if other people found out about them.

「Mylia… Titania-san, too… They really don’t have common sense…」

Chloe was worried that Mylia would make something strange again when she was away.