The first thing that came to my mind when I saw the “+1” in the item name wasー when you strengthen your weapon or when you get a high quality item in MMORPG.

In other words, the “+1” notation was written automatically by the item box so that I could easily understand what it meant because I used to play MMORPG in my previous life.

So the quality of segila grasses has improved, huh.
But, I just cultivated it as usual, so why did it improve?
Hmm. Let’s ask Nicola.

After I cut enough segila grasses to make potion for today, I put them in my item box and headed for the children’s room.
Nicola must be reading a book there at this time.

I opened the door and found Nicola sitting in a chair reading a book.

For an 8-year-old child, she had a well-proportioned beautiful face.
Her blonde that stretched to her back shone beautifully by the sunlight poured from the window.
Even after 2 years, the idol of the neighborhood was still as beautiful as ever.

「What’s wrong onii-chan? You just went to the flowerbed, right? Why do you come back?」

「When I appraised the segilia grass, it had “+1” in its name」

I took out a segilia grass +1 from my item box and showed it to Nicola.

「Ehh… I thought you knew so I came to ask」

「Indeed my boss had put the knowledge of this world into my head, but that doesn’t mean I know every single thing, you know?」

She looked away, put her index finger between her eyes, and made a gesture like pushing glasses.

I ignored it, but she kept pushing the air-glasses.
Can’t be helped then…

After I responded like that, she made a satisfied look.

*/ TL : it was from the famous line of manga called “MMR Mystery Magazine Reportage” 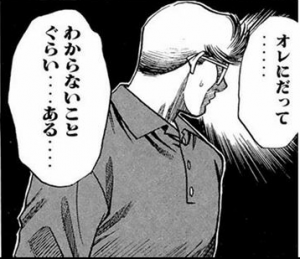 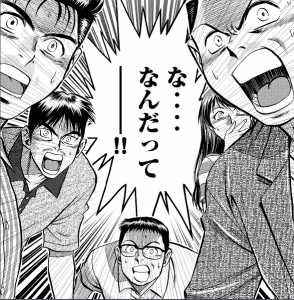 「For now, why don’t you try making a potion with it?」

「Looking for the answer by experimenting, huh. Yeah, you’re right」

I put out a large glass container from my item box.
I bought it with my pocket money by the way.
The price was three silver coins.

I cut and crushed the segilia grass +1 with my hands and put it in the container.
When I first made a potion two years ago, I turned the grass into an ointment first by mashing it, but then I realized that it could be dissolved without even turning it into ointment first. Just cutting it with bare hands is enough.
I’m glad that I didn’t have to mash it. Otherwise, I would have become a bulky boy with thick arm muscles…

After I put the grass in the container, I used water magic to pour water in it, and then started injecting light attribute mana.

After a while, I couldn’t inject more mana.
Looks like it’s completed now.

It looked like the green color was darker than the normal grade-E potion.

I put it in my item box andー

「But the material written is only ‘Segilia Grass’ without +1. Maybe because it’s segilia grass after all so the item box doesn’t bother to write the “+1”? So, how much does a grade-D potion cost? 」

「Because it can also heal a fracture completely, it’s a lot more expensive than grade-E. It’s sold for about 10 gold coins」

「Finally, we are one step closer to our dream of living a life where we can eat and sleep all day~」

「Maybe it has evolved? I think it’s the result of onii-chan injecting mana everyday」

「Is that so? I’ve never heard of a plant evolving because it was continually injected with mana though」

「Maybe it was a very rare occasion?」

Hmm. Maybe she’s right.
The name of magical tomatoes hasn’t changed even though I have been cultivating it longer than the segilia grasses.
The name hasn’t changed, but I feel like the tomatoes taste better than when I first tried it.

「Onii-chan, you might have completely forgotten, but a part of an angel’s soul is mixed in with your’s」

「An angel’s soul? You mean your soul?」

「Yes. That’s why if you inject your mana continuously, it can even evolve the herbs」

Hmm… I still don’t understand how it works.

Oh well, let’s leave aside the details for now.

「Umm… For now, I’ll sow the seeds I harvested and see what will happen」

By the way the seed’s name was also『Segilia Grass’s Seed +1』.

「You’re right. After all, we shouldn’t count our chicken or something」

*/ TL : what Nicola was trying to say was “we shouldn’t count our chicken before they hatched”.
It means “don’t expect all our hopes to come true”.

「You forgot the phrase, huh… Well then, I’m going to the flowerbed. The inn will get busy soon, so I’ll help after sowing the seeds. What about you, Nicola?」

「I’m going down too. Recently, I feel like Mama is getting more and more strict…」

Maybe it’s because our inn has become more busy than before.

From my point of view, Nicola was just skipping too much, but I think Mom scolds Nicola because she’s worried if Nicola will become a slacker rather than scolds her for skipping.

We left the room and went down the stairs to the first floor.