Nicola and I went down to the backyard, and sowed the seeds of segilia grass +1.
After that, we entered the kitchen.

In the kitchen, Dad, Mom, and the helper oba-san were busily working.

Mom, who was cutting the cabbage, called out to us without turning around.

「Ara, nice timing! Can both of you handle the dining hall?」

The two of us headed to the dining hall.

It was before dinner so the dining hall was almost full.

When I was about to wipe the table, the door opened, and a woman with long hair wearing a black dress that emphasized her chest, entered the dining hall.

Yup. It was Celine.

「Mark, Nicola-chan, hello~. I know it’s sudden, but can you get me ale and okonomiyaki now?」

After saying that, Celine sat down at the counter.

She left for a quest yesterday, and just returned now.
She looked very tired.

By the way, okonomiyaki had become our inn’s popular menu.

When Dad made it for the first time, he struggled a lot because he couldn’t make the sauce really well, but after about half a year of research, he finally succeeded making a sauce that goes well with okonomiyaki.

After our okonomiyaki became popular, the stalls around the fountain square started imitating and also sold okonomiyaki.

Well, because there’s no copyrights or intellectual property rights in this world, I won’t blame them for imitating our okonomiyaki. Rather, I’m happy because there are more variations of okonomiyaki in this town thanks to them.

I returned to the kitchen and told Dad that Celine ordered an okonomiyaki.

And after waiting for a while, Dad handed me the freshly made okonomiyaki.

It would be great if there were sprinkles of *katsuoboshi on top of it.
But unfortunately, it wasn’t available in this world. 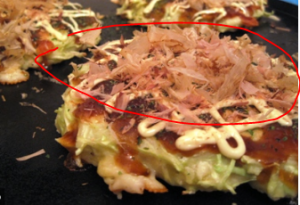 Moreover, I didn’t know if squids existed in this world or not, so we couldn’t make takoyaki.
Well, there are pork balls in this world, but it was far too different from takoyaki.

This region was far from the sea, so people around here didn’t know much about fish.

While thinking maybe I’ll go to a town by the sea someday, I carried the okonomiyaki and ale to the counter where Celine was sitting.

Using a knife and fork, Celine cut the okonomiyaki into a bite-sized piece and carried it to her mouth.
Then, she drank the ale all at once and slammed the glass on the table.

「Puaaahhー! Delicious! I live to enjoy this!」

Well, I can understand that feeling.

I can understand but…..

At this rate, I feel like Celine will become a bachelor woman eventually.
I’ve known her for more than three years now, but I’ve never seen her with a man.

Sometimes, I saw her with someone, but that person was a young novice female adventurer.
I wonder if she likes helping beginners.
Wait… but, why does she only help girls?
Could it be… Celine… likes women…?

「By the way, what kind of quest did you accept this time?」

「I went to collect stone crawler’s skins. You know? It’s worth 3 gold coins each! I got excited and went all the way to their habitat, and ended up camping for a night. I was planning to come back in a day by depending on a map I got from the client, but… Khhh! That map’s scale was weird…!」

「Yeah. Sometimes we need a map from the client. But. Khh! The client this time! He made a weird map! I got a lot of money, but I will never accept quests from him again!」

Celine began to complain.
She seemed to be in a bad mood today, so let’s give her an extra service.

「Celine, do you want to take a potion bath?」

Immediately, she stopped making a face like an angry gorilla, and turned to me with a big smile.

「Really!? Of course! Thank you, Mark! Ahhh~ I also just thought about taking a bath to refresh my body and soul today!」

After she said that, Celine started eating okonomiyaki quickly.
It seems that she wanted to enter the bathtub as soon as possible.

By the way, potion bath is literally bathe in hot water mixed with potion.

Because I continuously made potions as magic practice, I had so many of them in my item box.
Since I couldn’t sell them yet, I did various experiments with the potions.
One of the experiments wasー I poured a bottle of grade-E potion into the bathtub and mixed it with hot water, and then Mom and Celine who bathed with it said their fatigue from working was gone completely, and they felt like their skin had become more beautiful.

After that, they kept asking me for a potion bath.

Well, indeed I have a lot of potions, but it would be a waste if they used it every time they took a bath, so I told them that I would only use 5 bottles a month.

「But it’s a really luxurious way to use potions, isn’t it? I’ll pay the potion for the bath if you want.」

「No, it’s okay. I still have a lot of them. Besides, Celine, you always buy my potions to work, right? That’s more than enough, you know?」

「Is that so? Well, because I know how skillful you are, I won’t buy potions from somewhere else again.」

Because I wasn’t registered in the Merchant Guild yet, I could only sell it to Celine for now because she trusted me.

I sold for 7 silver coins per bottle, so for Celine, it was cheaper than buying it from the guild which was 10 silver coins.

「Thank you. With you buying my potions, my pocket money has increased, so don’t worry about the bath.」

「I see. Alright then, I’ll gratefully enjoy the bath. And Mark, you want to join me? I’ll wash your back as my gratitude~」

After I answered her randomly like usual, I left the counter and headed for the bathhouse.

『Onii-chan, you’re already 8 years old, you know? Maybe she will stop inviting you soon. Are you okay with that?』

It seems Nicola was listening to us while wiping a table.
She grinned at me and ran toward Celine.

「Celine onee-chan, can I join you?」

Oi, oi… She wants to slack off again…