I leaned my back against the chair and closed my eyes.

I’m tired not only because I used too much mana but I’m also tired physically. After all, today I walked to Bian’s house, climbed up and down the hill, explored the mine, and fought strong Stone Lizards.

When I was taking a rest, I heard Nicola say, “I want to explore this house!”. She jumped off Eclain’s lap and then went to the nearby room with Eclain.

I’m sure she’s tired too. She could have just stayed on Eclain’s lap but I guess she couldn’t stand the stinky smell of alcohol coming from Eclain.

Well, as her brother, I’m glad that she didn’t awaken to a new weird fetish.

I feel better after taking a nap for about thirty minutes.

I took out the juice we bought at the stall at Fatia from my Item Box and drank it.

When I noticed Celine, who was sitting next to me, I took another bottle and handed it to her.

「No problem. By the way, can you tell me more about Resonance Stones?」(Mark)

「Well, as you know, they’re some kind of magic stone that can be used as a telecommunication tool. You split them into two, and when you put wind-attributed mana into one of the two halves while making a voice, you will be able to hear your voice from the other half. Because they require a tremendous amount of mana, people normally use them to send quick messages at a short distance. The town of Sadola is far away from this village but I believed that you would be able to maintain it for a few minutes. I expected nothing less of you, Mark~」(Celine)

「I see. I’m glad that I’ve met your expectations.」(Mark)

Celine stroked my head while smiling at me.

「If you keep practicing magic and increasing your mana, you may reach the point where you won’t feel tired using Resonance Stones. Well, if that happens, the government might come after you and ask you to work for them. Communicating using Resonance Stones is way more reliable than using birds and letters after all.」(Celine)

「Uhh, I don’t know about that… Working as a fuel to activate Resonance Stones doesn’t sound fun at all.」(Mark)

Even if they would pay me good money for that job, I would definitely turn them down. Besides, I don’t want to get involved with those who have power in this country.

When I said that, Celine grinned at me for some reason.

「Ufufu. That’s right! After all, the only job that suits you is adventureー」(Celine)

「ーNah, I told you I would decide it after thinking about my future really carefully.」(Mark)

「Puu! I knew you would say that.」(Celine)

I don’t know what would have happened if Celine wasn’t with us when the nest collapsed.

Now I really think that adventurer is a very dangerous job…

If I would become an adventurer, perhaps teaming up with Celine would be a good idea. I always feel safe around her. However, relying on her forever is definitely not good.

Well, I’m still eight years old. I still have a lot of time to think about my future. People like Delica who are working hard towards their future although they’re still young will laugh at me though.

Alright, let’s forget about it for now. I should start preparing for the welcome party.

When I changed my mood, Nicola and Eclain returned to the living room while holding hands. This house is not very big, so their exploration ended quickly.

「Oh? Those drinks look delicious~ Can I have some?」(Eclain)

「Ah, Eclain-san, because you drank too much alcohol, I’ll give you the potion I made instead.」(Mark)

I took out an E-grade potion from my Item Box and handed it to Eclain.

Actually, F-grade potion is good enough for hangovers but I think a hard drinker like Eclain needs an E-grade one.

「Hee~ Mark-chan, you can make potions? That’s awesome! I don’t think I need a potion but since you gave it to me, I will drink it then~」(Eclain)

She opened the lid and drank the potion at once.

Somehow, she reminds me of myself when I drank “Ukon No Chikara” after drinking too much alcohol in a bar in my previous life.

*/TL : Ukon no chikara / ウコンの力 literally means “the power of turmeric” but in Japan, it’s actually the popular brand of the remedy to prevent and treat hangovers. 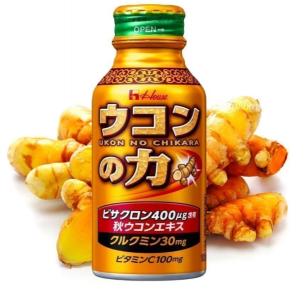 Everyone knows that you shouldn’t drink too much alcohol but I understand how she feels somehow.

Honestly, I feel pity for Nicola for not being able to act as usual, so I hope my potion will remove the smell of alcohol as well.

「Phew… Ara? I feel like I can see the surroundings and think more clearly. Mark-chan, your potion is amazing!」(Eclain)

Eclain was very surprised by the effectiveness of my potion.

Well, as expected of a potion costing one gold coin.

Nicola approached Eclain and started sniffing. Perhaps she wants to make sure if my potion removed the alcohol smell or not.

After that, she clung to Eclain’s waist. Looks like my potion did remove the smell.

「Mama? Ara ara~ You remind me of Celine when she was little. She used to call me “mama” back then. Aahh… I miss the little Celine… I can’t believe she has grown into a rude lady like this.」(Eclain)

「I’m sorry for growing up, I guess…」(Celine)

Eclain held Nicola in her arms, lifted her up, and rubbed her cheek against Nicola’s.

Nicola sniffed one more time and smiled happily after she confirmed that she could no longer smell alcohol from Eclain’s body.

Well, Nicola did her best today, so I think she deserves this much reward. Besides, Eclain doesn’t seem bothered when Nicola sniffed her.

While I was watching Nicola and Eclain, Celine called out to me with a teasing voice.

「Mark, do you want me to hold you in my arms like that~?」(Celine)

「No, thanks. More importantly, let’s prepare for the party.」(Mark)

Celine pouted at me but I ignored her and took out some food from my Item Box then arranged them on the table.

This welcome party is for myself and Nicola, so most of the meals that I take out are Dad’s homemade meals such as hamburgers, stews, and okonomiyaki.

Eclain stared at me with interest while I was arranging the meals.

「Nee~ nee~ Mark-chan, I was drunk a while ago, so I wasn’t paying attention, but… Is that an Item Box?」(Eclain)

「Hee~ You’re so lucky to have one. Be careful not to be kidnapped by bad people, okay~」(Eclain)

「Don’t worry. He’ll be safe as long as he’s with me~ Besides, he’s strong enough to protect himself.」(Celine)

While bringing a barrel from the corner of the room by rolling it on the floor, Celine interrupted our conversation.

「Celine, that’s alcohol, right? You’re not gonna drink the one you bought in the inn?」(Mark)

Last night, at the inn in the town of Sadola where we stayed, Celine bought a barrel of alcohol. Because it was too much to drink by herself, he asked me to store the rest in my Item Box.

「Ah, can you give that to my mom? She’s been drinking homemade fruit liquor all the time, so I think she will be happy to drink a different type of alcohol.」(Celine)

I took out the barrel from my Item Box and put it next to Eclain.

「My, my~ Isn’t it ale? It’s been a long time since the last time I drank ale~ Merchants rarely come to this village after all.」(Eclain)

「By the way, Celine said “homemade fruit liquor”, so did you make all the alcohol in those barrels yourself?」(Mark)

I asked Eclain while pointing at the barrels at the corner of the room.

「Eh? You can make alcohol with dark element magic?」(Mark)

Without waiting for my reply, Eclain put Nicola down and walked toward the front door.