The next morning, Mylia decided to go home after eating breakfast.

The breakfast was the fresh leaves of the World Tree and cookies made from various fruits.

While enjoying the light breakfast with Leaf, Mylia called Titania with Phone Magic.

（It’s still early. I wonder if Master is awake…）

「Master, are you awake? Can you hear me?」(Mylia)

「Good morning. I’m sorry if I woke you up.」(Mylia)

（Hee… She’s rarely awake at this hour. Probably she woke up early because Jasmine onee-sama is with her.）

「I see. I just want to tell you that I’ll be going home soon.」(Mylia)

『Alright~ So, how’s your stay at the dryad’s house? You didn’t encounter any danger, did you?』(Titania)

「Nope. It was a fun stay! Leaf took good care of me. I’ll tell you in detail later. Well then, enjoy your breakfast. I’ll see you later, Master~」(Mylia)

Mylia hung up the Phone Magic and looked up at the morning sunlight spilling from the World Tree branches.

（A beautiful view, fresh and delicious food, and a kind dryad… I’m glad I decided to stay here for a night… I will definitely come again! When the time comes, I will bring Leaf something to trade with the World Tree lettuce!）

While thinking that, Mylia finished her breakfast and looked at Leaf who was sitting in front of her.

「Leaf, thank you for the lovely breakfast! The cookies you made are delicious!」(Mylia)

Mylia stretched out her right arm toward Leaf.

Before she realized it, the other dryads gathered on the branch above Leaf’s house to see Mylia.

「Can you roll your sleeve?」(Leaf)

「Okay… By the way, I’ve been wondering, why haven’t I seen any male dryads? Are all dryads female?」(Mylia)

Mylia asked while rolling her sleeve.

Leaf then held Mylia’s right hand and answered while observing her arm.

「We just look like little girls. We actually have no gender.」(Leaf)

After Leaf told her that, Mylia had a strange feeling when she looked up at the dryads gathered on the branch.

「So you guys are neither girls nor boys… You guys have always been like this since you were born?」(Mylia)

Leaf didn’t answer Mylia. She was busy observing her arm.

Mylia decided not to ask further. It wasn’t that she was bothered by the fact that dryads were genderless.

After observing Mylia’s arm for a few minutes, Leaf started moving her hair.

Her hair was waving and stretching toward Mylia’s arm.

Mylia followed Leaf’s hair which was moving like a tentacle with her eyes.

The moment it got close to Mylia’s arm, the tip of the hair stiffened and stabbed Mylia’s arm like a syringe.

Mylia instinctively tried to shake her arm but Leaf was grabbing it tightly, so she couldn’t move.

「How can I stay still while your hair is getting inside my arm!?」(Mylia)

With the index finger of her left hand, Mylia pointed at the wriggling hair stabbing her right arm while shouting in panic.

A few seconds later, Leaf pulled her hair out of Mylia’s arm.

Mylia then immediately inspected her arm, making sure that there was nothing wrong with it.

「Hold on… I don’t understand…」(Mylia)

Mylia was so confused.

「Mylia, you are a strong magician. You are also kind to me. That’s why I want you to join my family.」(Leaf)

「Since when do you think of me like that?」(Mylia)

「Since we ate the leaves of the World Tree together.」(Leaf)

（She’s expressionless but her eyes are so dazzling!）

「Mylia, try to touch your head.」(Leaf)

Mylia stretched her arm upward and touched her head just like Leaf told, and she felt a strange, foreign object on her head.

She then took out a hand mirror from her magic bag.

She was shocked when she looked at herself in the mirror because there was something that looked like a white radish sprout on her head.

Mylia then tried to pull it off her head while changing the angle of the mirror in her hand but she couldn’t do it because it seemed that it was a part of her body.

Apparently, her ahoge had turned into a white radish sprout.

*/TL: Ahoge is an exaggerated cowlick 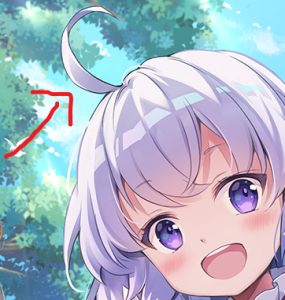 「Leaf what is happening!? I don’t want this! How do I pull it off?」(Mylia)

「Don’t worry. You can hide it. Try to squeeze your stomach, tighten your abdominal muscles.」(Leaf)

After she did that, the white radish sprout on her head turned back into her usual ahoge.

「Thank god… I don’t want to live the rest of my life with a white radish sprout on my head.」(Mylia)

「That’s the proof that you are a dryad.」(Leaf)

「No, don’t worry, you are still a human but you are also a dryad at the same time.」(Leaf)

「Kind of. But there’s nothing to worry about. It won’t bring you any harm.」(Leaf)

「Well, that’s a relief, but why did you do this to me all of a sudden? At least, you could have asked me first, right?」(Mylia)

After putting back her hand mirror in her magic bag, Mylia asked Leaf while glaring at her a little bit angry.

「I’m sorry. But now that we are family, you can come to visit anytime and take as many leaves of the World Tree as you want.」(Leaf)

She was angry but then she was overjoyed after she heard that.

Mylia sure could change her mood in a blink of an eye.

（If I can take those delicious lettuce leaves as many as I want, then there’s nothing to complain about!）