When Chloe’s cry echoed throughout the dormitory, Mylia was sitting at one of the seats for Magic Department freshmen in the central hall.

The central hall was originally a mini castle built by Daemon the Collector that was once used as a ballroom.

Stained glass with a complicated structure was attached to the ceiling, and when the light magic tools were turned on, it would look like several layers of rainbow falling down the hall.
That was why this hall was known as Rainbow Castle among the students.

（Whoaa… I heard some students say that this hall is called the Rainbow Castle. It’s so beautiful… If I compare it with the Atwood’s mansion, this Rainbow Castle is like a lavender flower, and the Atwood mansion is like umm… belly button gunk or something…）

Mylia’s evaluation of her house was very, very low.

While Mylia was gazing at the ceiling with an amazed face, the freshmen around her were glancing at her.

They were curious about the Dragon Slayer medal and the star badge on Mylia’s chest.

The silver-haired pigtail girl next to Mylia was staring at Mylia’s face. She wanted to have a talk with Mylia, but Mylia was completely unaware.

「Good morning, new students. I would like to thank each and every one of you for being here at this wonderful place. Before we get started, we will hear a welcome speech from the school director. 」(female teacher)

The voice of the female teacher who seemed to be the MC (master of ceremonies) echoed in the hall.

There was a pouch on her waist, indicating that she was in charge of the Industrial Department.

After the female teacher said that, all the freshmen straightened up their backs all at once.

Mylia also did the same thing and looked at the podium.

The next person who stood on the podium was a 120 cm tall humanoid rabbit wearing a formal suit and round glasses.

She could hear the freshmen around her saying, “So cute~”.

The rabbit school director wore a blue velvet robe, showing that he is a magician.

（He’s so cute and looks so fluffly! Ahh, I wanna hug him~ Is he really the director of this school?）

After the rabbit received a microphone-like tube from the female teacher, he twitched his nose and started talking.

「Excellent ladies of the Kingdom of Adrashlem, congratulations on your enrollment.」(school director)

The rabbit had an attractive male voice.

All the new students started to make some noises. They were surprised by the rabbit’s voice.

「My name is James de la Madison, the director of the Adrashelm Royal Girls’ Academy. Most of you might be wondering why the school director is a rabbit. The reason why I became a rabbit has a lot to do with this castle built by Daemon the collector.」(school director)

The rabbit looked down after he said that.

「Exploring the unknown is a great thing… but sometimes, there’s a price you have to pay…」(school director)

He turned his gaze back on the freshmen, and then everyone started to listen to him with serious faces.

「When I was investigating this castle twenty years ago, my body was reshaped with a magic tool. Curiosity can sometimes lead to catastrophe… Now this castle is safe to live in, but there may still be some traps we don’t know about. Now that you are going to live in this castle, I want you to keep that in mind.」(school director)

（A magic tool…? So he was cursed by a magic tool? I like that the school director is a cute rabbit, but I’m sure the person himself hates to be a rabbit.）

Mylia was curious. She started focusing her magical power in her eyes somehow.

When she looked at the school director, she could tell that his body was full of magical power. The color of his magical power was dark blue.

（Hmm… I don’t really get it… Master can distinguish the color of magical power more clearly and can appraise it, but…）

Mylia was a bit regretful that she couldn’t contact Titania with telepathy.

She wanted to know how come the school director was cursed to be a rabbit. She kept trying to appraise his magical power, but she couldn’t figure it out.

Fifteen minutes later, the school director’s speech was over. He just explained important school rules, but Mylia wasn’t listening at all.

The school director got off the podium and returned to his seat.

（Umm… This is too hard for me now. I’m curious but I think I should give up for now…）

「School Director, thank you for the speech. Now we will distribute star badges to all the new students. Please wear it as soon as you get one.」(female teacher)

（Star badge? I already have one so I don’t need any more, right? But, Chloe onee-chan has a lot of them… Umm…）

While Mylia was thinking, the fourth grader Magic Department student, who carried a tray full of star badges, stopped in front of Mylia.

「But I already got one from Her Majesty…」(Mylia)

「Fufu. These ones are different. They are distributed to every new student once a year without exception.」(senior)

The senior smiled gently at Mylia while holding out the tray to Mylia.

Mylia had no choice but to take one star badge and put it on her chest.

Now she had a Dragon Slayer medal and two star badges.

By the way, the senior had five star badges.

「I hope you will be assigned to Aqua Sophia.」(senior)

The senior whispered to Mylia that and continued distributing the star badges.

（Aqua Sophia? She said the same thing as Chloe onee-chan… Ah, I just realized her ribbon is also light blue. She also has a lot of star badges just like Chloe onee-chan… So we will get a star badge if we do a good thing? Hmm… I still don’t understand…）

If Mylia listened to what the school director explained earlier, she wouldn’t have had this kind of question.

（I just remembered that I haven’t had breakfast. Ughh… I’m hungry…）

ーbut of course, Mylia didn’t even notice it. She was thinking about something completely different.

Among all the freshmen, only Mylia was thinking about yakiniku restaurants during the entrance ceremony.

*/ ‘Mou’ means ‘anymore’, so it was like “I can’t stop anymore!” or “I can’t stop eating anymore!”, but at the same time, it’s also how cows sound in Japanese.
*/ chibi is a small and chubby style of caricature

While Mylia was thinking like that, the seniors finished distributing star badges to all the freshmen.

「Lastly, the dormitory division. We will distribute the ‘Seeds of Dreams’ to everyone.」(female teacher)

After the female teacher who acted as the MC said that, the hall started to get noisy, proving that everyone was waiting for the dormitory division.

There were four towers with different roof colors that were built by Daemon the collector that were now used as dormitories, and each dormitory was named after the color of its roof.

This dormitory division had an important meaning, but Mylia didn’t know that.

After a while, the kind-looking senior from earlier, was handing out small flower pots to the new students.

（A flowerpot? Are we going to grow a flower?）

「Let me inform you once again. If it’s a rose, then you will go to Rose Maria; if it’s a Mikazuki flower, then Crescent Moon; if it’s a white lily, then White Lagoon; if it’s lavender, then Aqua Sophia. Please pray for three minutes starting now.」(female teacher)
*/ Mikazuki = Crescent

Mylia couldn’t keep up. It was because she didn’t pay attention to the school director’s speech earlier.

The Seed of Dream was a synthetic magical seed created by Daemon the collector.

It was a strange magic item that Daemon used to decide which knights were to be allocated to which towers based on their personalities and tendencies.

There was a magical mechanism that prevented people from entering the towers unless they followed this procedure.

When Mylia looked to the side, she saw the silver-haired pigtail girl hugging her flower pot while praying seriously.

（I don’t know how to pray with this pot, but… looks like I have no choice but to do it…）

Mylia hugged her flower pot and began praying, imitating the girl next to her.

The stained glass on the ceiling kept reflecting colorful rainbows on the new students’ heads as if it was watching over their sacred ritual.

The teacher and the senior students were also watching over them quietly.

（I want delicious yakiniku… a happy life… and cute friends…）

Regardless of whether she was serious or not, Mylia prayed.

（I want a luxury meat lunch like the one at Jojoen… Ah, the one at Mou Mou Paradise was also really good~… Speaking of that restaurant, its mascot, the chibi cow, was kinda cute….. Beef ribs, beef tongue, skirt steak… Aahh~ I wonder if there’s a meat shop in this city. I should go look for it when I have a chance to go outside…）

While she was “praying”, Mylia’s pot started to shake.

When Mylia opened her eyes, she saw the stem growing from the soil, and shortly after, the tip became a bud.

While she was fascinated by the unscientific phenomenon in front of her eyes, the bud popped into a flowerーー No, it wasn’t a flower… It was…

Suddenly, a dumb-sounded voice echoed in the quiet hall.

The surrounding freshmen looked at Mylia all at once.

It wasn’t a flower that bloomed.

It was a mini-sized cow that looked like a mascot character. 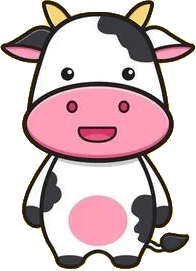