No matter how I look at them, they look like squid in my previous world.

「’Squid’? They are monsters called ‘Tentacles’, you know? But you guys are amazing for not being scared at them! Children who can use magic are different after all!」

No… I don’t think magic has anything to do with it.

I glanced at Nicola, and she sent a telepathy to me.

『Surely they are monsters. They just look a lot like squid.』

I see. So they are monsters that happen to resemble squid, huh?

Well, of course. Squids don’t live in lakes after all.

I asked Sanmina a little nervously.

「Umm… crunchy? No, chewy? They have a unique texture. Even if we only grill them with a little bit of salt, they taste delicious!」

That’s one way of eating squid…

Ahh~ I really want to try them.

「Onee-chan, where can I eat them?」

「I think we can eat them at Ojii-chan’s house. Gauche-san seems to like this monster a lot after all.」

「Ah, didn’t I tell you? I’m the granddaughter of the village mayor.」

「Nope. I live with my husband and my child.」

「Eh!? Onee-chan, you are married!? Moreover, you have a child already!?」

Said Sanmina while grinning at me.

「That’s not what I mean! I was just surprised because you talk like a little girl!」

「I, Is that so? You’re pretty blunt, aren’t you?……. So it’s true that in towns, people are getting married later in life, huh? In this village, people getting married and having children at my age is a normal thing. Besides, I don’t have any reasons to not get married because… I have nothing else to do after all! Hahaha!」

If she has nothing to do, why don’t she work today!?

「Oi, Sanmina! Where have you been!? You skipped work, didn’t you!?」

Suddenly, I heard someone yelling from behind.

It was a tanned woman.

It seems that she found out that Sanmina skipped work.

「Oh, shoot! Well guys, I’m sorry, I can’t guide you around the village any longer. We’re going to catch monsters in this lake tonight, so you can come to watch if you like! See you later!」

Sanmina waved at us and ran toward the woman.

「Geez! You didn’t change at all even after you got married and had a child!」

While listening to Sanmina being scolded by the woman, Nicola and I were looking at the men fishing on the lake for a while.

「Shall we get back?」

After enjoying the beautiful lake view for a while, we decided to return to the village.

As we walked through the woods, Nicola talked to me.

「Onii-chan, if those squid monsters taste like real squid, we can use them to make a perfect okonomiyaki!」

「Yeah, you’re right! If we cut them into slices, people wouldn’t know they were monsters. If they really taste delicious, I’m sure our okonomiyaki will become more popular!」

Perhaps, the reason why people didn’t like monster meat was because they saw the monster’s gross appearance before they ate the meat.

「Ehh, why not? I had already imagined you opened your arms in front of a giant squid and said something like, “Ika Zanmai~”」

「Yeah, but I will never place a bid over a hundred millions of yen for just a squid!」

While having such a stupid conversation, we passed through the woods.

*/TL : Ika (squid) Zanmai is a pun for Sushi Zanmai which is a chain of sushi restaurants in Japan.
The owner, Kimura Kiyoshi, also known as “Tuna King”, often goes to Japanese New Year Tuna Auction.
His bid record was 333.6 million yen for a bluefin tuna. (over 3 million dollars btw)
Whenever he wins a bid, he will always spread his arms while people taking pictures of him and his tuna. 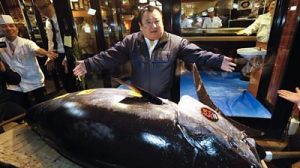 When we returned to the village square, Gauche oji-san and Delica were still there.
They almost completed the seesaw.

There were many children playing on the elephant-shaped slide I made.
I’m glad they are happy with it, but I hope they don’t play with it too much until they burn their butt.

「Oh, Mark, Nicola, welcome back! How was the village?」

「Boss, we’re back~ This is a nice village. The lake was very beautiful! And the monsters looked delicious.」

「Geh…! There’s no way such disgusting monsters are delicious! Well, aside from the monsters, I agree that this is a nice village. Ah, can you wait a moment? We almost completed the seesaw. After that, let’s go to the village mayor’s house together!」

After the seesaw was installed, we cleaned up the tools and walked to the village mayor’s house.

We walked through fields as soon as we left the village square.
There were almost no villagers working on the fields, perhaps the field work was over at this hour.

「You know, Mark? When Delica and I were still working, the village mayor came to the square. He looked so happy after seeing many children playing on the slide you made. Looks like we can expect a delicious dinner tonight!」

「I see. I’m glad that he was happy. By the way, he will serve us monster meat for dinner, right?」

「Yeah. He said he will serve us the best monster meat meals!」

「Uhee….. So I’ll see those disgusting things on the table, huh…」

Delica stuck out her tongue as she made a disgusted face.

「Boss, you shouldn’t judge the taste by its appearance.」

「I know, but… I can’t handle that disgusting appearance….」

Well, I can’t force her to try it.

Besides, if it doesn’t taste like squid, then I may not even want to eat it anymore.

「You know? That meat is really delicious to eat while drinking sake! Well, children like you guys won’t understand it, though. Ahh~ I can’t wait for dinner!」

So it goes well with sake, huh?
Just like squid…

「If it’s delicious, maybe I will buy some to bring home.」

「Oo! I’ll also buy some. Mark, would you mind if I store my monster meat in your item box? After we return home, I can store it using a magic tool at home.」

Saying that Gauche oji-san pushed the cart with a face full of excitement.

「Thank you! I hope they sell it in our town, but since they look gross to some people, they are hard to sell….」

I see.
So besides monster meat is difficult to store, its looks is also one of the reasons why the villagers here don’t sell it elsewhere.

If only it’s sold in our town, I can buy it anytime.

However, I need to try it first and find out whether it’s delicious or not.

As my heart was filled with expectation, we walked down the village road lit by the orange light of the setting sun.