Everyone was frozen in shock when Leaf suddenly appeared in the center of the audience room.

Even the queen, who always kept her cool, couldn’t help but open her eyes wide. She was surprised by the mysterious girl’s sudden appearance but at the same time, she was also amazed by her teleportation magic.

「Mylia onee-chan, I came to play as promised.」(Leaf)

As she said that, Leaf turned her gaze to Mylia, who looked a bit panicked.

It was hard to tell what Leaf was thinking because she was expressionless as usual.

Mylia replied to Leaf with an awkward smile while glancing at the surrounding people.

「I can use Phone Magic now.」(Leaf)

「Yeah, I could hear your voice loud and clear. I can tell that you have been practicing really hard. You’re amazing!」(Mylia)

Although it was only a split second, the edge of Leaf’s pink lips lifted, forming a smile as she thanked Mylia.

（Cu… Cute! She’s so cute! Aaah! But I can’t appreciate her cuteness because the queen and Dalia’s gazes are kinda frightening me!）

Feeling the piercing gazes from the queen and Dalia, Mylia tried her hardest not to look in the direction of the throne.

Chloe, who was standing right next to Mylia, brought her face closer to Mylia’s and whispered.

「Mylia… is that the dryad girl you once told me about…?」(Chloe)

At the same time as Mylia replied to Chloe with a nod, the clear husky voice of the queen echoed throughout the audience room.

「Mylia, do you know that child? Why can she use Teleportation Magic? Mind explaining it to me?」(Kushana)

Now that the queen asked her questions, Mylia had no choice but to turn her gaze toward the throne.

The queen was staring at Mylia with sharp eyes as if she was telling Mylia that she had no right to refuse to answer.

Meanwhile, Dalia was pointing her magic wand toward Leaf. She was ready to protect the queen from the suspicious green-haired girl.

（Awawawa! What should I do? What should I tell them!? Aaahh…! Leaf, why do you have to come now? …Ugh, there’s no point in blaming her right now… Since Leaf used Teleportation Magic in front of these people, I don’t think I can make something up here… I think I have no choice but to speak honestly to the queen…）

Next to her, the queen blinked several times while observing Leaf from her throne.

Meanwhile, the royal magicians and civil officials in the room started to whisper to each other.

「Dryad, she said?」
「Is that even true?」
「I can’t believe they exist!」
「No way…」
「But…that green hair… that huge leaf on her head…」
「Yeah. On top of that, she can use a high-level spell such as Teleportation Magic.」
「Then there’s no doubt about it…」(people)

There were theories that dryads existed in this world. However, no human had ever seen them. People believed that dryads were a legendary race similar to elves.

Even Chloe, who once heard about Leaf from Mylia, still couldn’t believe her eyes. She was staring at Leaf curiously.

Feeling the gazes from everyone in the room, Leaf squinted a little.

「Is it because everyone is looking at you?」(Mylia)

Leaf nodded at Mylia and raised her right hand. Then suddenly, she cast a spell.

A magic circle appeared and covered the entire floor of the audience room.

Right after, two five-meter-high walls made of intertwined ivy appeared from the ground, breaking through the high-class carpet on the floor and blocking the view of royal magicians and civil officials on both sides.

The voices of royal magicians and civil officials were faintly heard from beyond the two ivy walls.

The royal magicians and the civil officials were trapped between the walls of the room and the ivy walls on both sides.

Now the only ones that could see Leaf were Mylia, Chloe, the queen, Dalia, and the two knights standing by the entrance. 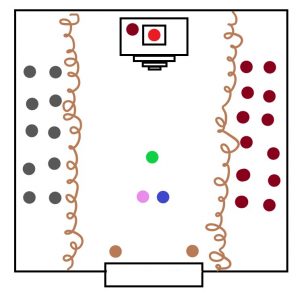 The knights were dashing toward the center of the room, trying to capture Leaf, but then the queen immediately stopped them.

「Stop it! Don’t even try to touch her! She is Mylia’s friend, so she is my guest too! I won’t let anyone treat her roughly!」(Kushana)

「U, Understood! Please forgive us, Your Majesty!」(knight)

As soon as the queen shouted at them, the knights went back to their positions.

Meanwhile, Dalia pushed her glasses up, fixing their position with a trembling hand while smirking creepily and muttering to herself.

「Not only can she use Teleportation Magic but she can also make these walls instantly with magic… A dryad, huh…? She is surely a powerful magician…!」(Dalia)

Dalia’s creepy gaze toward Leaf made Mylia worried, but Leaf didn’t seem to mind it.

「Mylia onee-chan, now we can talk.」(Leaf)

Leaf nodded. She looked just like an innocent little girl.

However, the way she acted without thinking made Mylia feel restless.

「Mylia, I won’t harm your friend so you don’t need to worry, but can you explain everything to me?」(Kushana)