Chapter 3-12 : The Second Daughter And The Seventh Daughter

Robin looked down at Mylia with a scary expression as always. Mylia then immediately switched herself to her absent-minded version.

Mylia opened her mouth and lowered the corners of her eyes, making an absent-minded expression.

She was nervous seeing Robin for the first time since she left the Atwood’s mansion.

「Hee… You’re wearing a pretty good dress for a pipsqueak like you. It’s so different from your usual dirty dress.」(Robin)

Mylia could feel the anger and jealousy coming from Robin’s gaze.

（Calm down, Mylia… This is not the time to punish her… Now that she still thinks that I’m a dumb, absent-minded girl, I will take advantage of it and wait for the right time…）

（Ugh… I’m nervous because it’s been a while since I acted like this… Am I doing it right…?）

Robin didn’t return Mylia’s greeting. She was just glaring at her.

Mylia then greeted her one more time.

（She hasn’t changed at all… As annoying as ever… Anyway, first, I need to gather more information. I think I can do it easier if I keep acting like this.）

The Viscount’s second son chased after Robin and stood next to her.

Robin looked at Darryl and made a fake angelic smile, continuing to act like a good woman.

Darryl noticed Mylia and turned his gaze down.

「Hello there, little lady. Are you lost?」(Darryl)

Mylia turned her gaze to Robin and replied to Darryl.

Getting pissed by Mylia, Robin reflexively raised her arm, trying to hit Mylia in the head like she always did.

（Oh? You wanna hit me? Go ahead then! Hit me! Hardening Magic, activate!）

Mylia immediately looked down and made her head as hard as rock with magic.

However, before Robin sent her fist to Mylia’s head, she remembered that she was in public.

She lowered her arm and combed her hair with her finger while exhaling deeply. She then forcibly made a smile and sent her gaze to Darryl.

「Aa… Ahem! Darryl-sama, this is the girl we talked about earlier, Mylia.」(Robin)

「Thi… This little lady is… the Dragon Slayer, Mylia…?」(Darryl)

The Viscount’s second son couldn’t believe that the short girl with lavender-colored fluffy hair and an absent-minded face in front of him was the rumored Dragon Slayer.

（Uwahh… He’s taken aback… It looks like my acting is perfect!）

He looked at Mylia and snorted as if making a fool of her. However, because he was an aristocrat who needed to maintain his good image, he then immediately smiled again.

「There are some geniuses in this world who can’t be judged by their appearance alone after all.」(Darryl)

Mylia, who had a good-for-nothing drunk father in her previous life and a muscle-brained selfish father in her current life, could read people’s negative emotions by just looking at their expressions in a second.

（This person absolutely has a bad personality… I can’t let him marry Jasmine onee-sama!）

While Mylia was thinking that, Robin stepped closer to Mylia and glared at her.

「M, Mylia, I’m Robilya, your cousin. I look a lot like Robin onee-sama but I’m not her.」(Robin)

Mylia tilted her head in a cute way, acting like a dumb girl.

「I’m Robilya. Did you forget about me? We used to play together when you were still living in your father’s mansion.」(Robin)

Darryl, who was standing next to them, looked confused.

Meanwhile, Robin, who was getting annoyed by Mylia, smiled awkwardly at Darryl. She then approached Mylia and put her hand on Mylia’s shoulder.

「Darryl-sama, forgive me, but could you leave us alone for a moment? I need to talk with her.」(Robin)

「Sure. Can you let me talk to her again later?」(Darryl)

「Well then, Miss Mylia, I will see you again later.」(Darryl)

Saying that, Darryl put his hand on his chest and bowed to Mylia with a smirk on his face.

At that moment, Mylia could tell how bad his personality was.

Robin, who hated it when Darryl bowed to Mylia, grabbed Mylia’s hand and pulled her back a little.

「It’s been a long time since we played together, so let’s have a fun talk, shall we~?」(Robin)

Robin bowed to Darryl and started walking while pulling Mylia’s hand with force.

While avoiding the joyful young people at the venue, Robin brought her face closer to Mylia’s ear and whispered.

「You pipsqueak…! I hope you remember what you did to me before you left home…!」(Robin)

（Hiiiyyy! It’s been a while since I saw her ‘Hannya’ face!）

*/ Hannya is a mask representing a jealous female demon.

（Not only does she look scary but she also smells of alcohol! It stinks!）

「I’m sure it was a fluke that you were able to cast magic on me before. I won’t let that happen again! And I will never forget what you said before you left!」(Robin)

After she said that, Robin took Mylia to the garden at the back of the party venue where there were not many people around. She then pushed Mylia against a wall.

（Thanks to my Hardening Magic, it doesn’t hurt at all though.）

Mylia was bad at faking pain but because Robin lost her temper, she didn’t realize it.

「Do you remember what you said to me before you left!?」(Robin)

While shouting at Mylia, Robin poked Mylia’s collarbone with her nail.

「Prepare yourself! I won’t forget what you’ve done to me!」(Robin)

Robin didn’t accept the fact that the dumb girl in front of her could use magic. She believed that all Mylia did was a mere fluke. That’s why she wasn’t afraid of Mylia at all.

She strongly refused to believe that Mylia had an extraordinary talent.

「Your money, you dumbass! You got a lot after you defeated a dragon by coincidence, didn’t you? 」(Robin)

「It wasn’t by coincidence though…」(Mylia)

「Hmph. Stop lying. There’s no way a dumb pipsqueak like you can defeat a dragon. I don’t know how you became a Dragon Slayer but I bet Chloe did something behind the scenes. She must have seduced aristocratic men with great power and made use of them!」(Robin)

（This woman…! I won’t forgive her for badmouthing Onee-chan! …Shall I cast petrification magic on her and use her as a target for my offensive magic practice? Oh, I know! I will cast Eternal Wasabi Magic on her so everything she smells will smell like wasabi! That must be horrible living like that!）

When Mylia started thinking about how she would punish Robin, Robin struck her hand against the wall where Mylia was leaning on.

（Uwah… What a terrible ‘kabedon’… It didn’t make me excited at all… Oh, God, I want to be ‘kabedon’ed by a cute girl like Aria-san, not an ugly woman like her!） 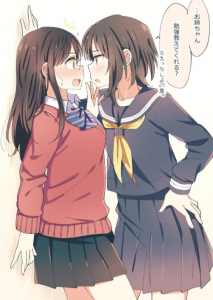 「Anyway, just give me your money! Hurry!」(Robin)

「Huh? What do you mean by lying? I told you I’m Robilya, not Robin onee-sama! So you should call me Robilya onee-sama!」(Robin)

「Tsk! Stop questioning me! Can’t you just shut up and do whatever I say!?」(Robin)

（Of course, it doesn’t hurt at all, but I wonder if my acting is good enough.）

「Now give me your money already!」(Robin)

Mylia didn’t feel pain at all but she started having a hard time holding in her emotions to keep acting like an absent-minded girl.

（Arrgghh! I should wait until I get more information but I can’t hold it in anymore…! Should I do it now…? Should I…!?）

When Mylia was confused, suddenly, she heard familiar voices calling her name.

Chloe and Aria came to the garden with a man following them.

After noticing them, Robin let go of Mylia’s ear and glared at Chloe.

Noticing Robin’s gaze, Chloe glared back at Robin as if she was looking at garbage or something.

「Chloeee! How dare you go to the royal capital before me!」(Robin)