While rubbing my stomach, I trudged toward the vacant lot.

Less than five minutes behind our inn,『Peace on Journey Inn』, there was a vacant lot along the outer wall of the town.

There used to be a general store in this vacant lot, but since the building was too old, the store moved elsewhere.

Even though this was a vacant lot, there were no big earthen pipes, a bullying fat boy, and a
grumpy old man who would get angry when a ball broke his glass window. 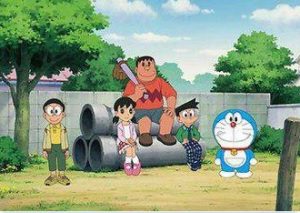 In the past, I thought ‘the grumpy old man’ was a scary old man who always got angry, but now I thought, who the heck wouldn’t get angry when some brats broke their window?

In the manga, it might be the place where many children were playing, but now, there was no one but me.
Well, I also just came recently after hearing about this vacant lot.
In this world, children were also important workers, so probably they were helping their parents and rarely playing.
I was still 5 years old, so I still didn’t have to help out with parents’ work……….. Right?

When I was thinking about that, I felt somewhat guilty for standing in a vacant lot doing nothing while other children were working.

Oh, right! How about training to expand my mana vessel like Nicola taught me.

I tried to remember what she said.

It wasn’t my first time using magic.
In this fantasy world, it seemed untalented people could only utilize their mana to use magic tools, but fortunately, I was able to use magic naturally.

For now, I tried to use earth magic and see what happened.
I stretched my hand forward and concentrated on magic.

Since Nicola was an angel with earth attributes, my best magic attribute seemed to be earth.
Nicola immediately found out about this when she saw my first time using magic.

Speaking of earth attributes, it was the weakest among four main attributes.
Also, earth magic users had an image that they love curry for some reason.
Well, it wasn’t like I wanted to be a first-class adventurer, so even though it wasn’t an aggressive attribute like fire or wind, I’m totally fine with it.

I closed my eyes and imagined the sand coming out of my palm.
The mana drained from my body and I could feel the sand materialized from my palm.
When I opened my eyes, I saw grains of sand flowing down from my palm

I tried to maintain this state and watched the sand for a while.
But I didn’t feel my mana drained that much.
If that’s the case I just have to concentrate my mana more in my palmー!…….No, wait… I wanted to avoid the template-happening for being passed out because training too hard like in the manga.
For now, I just sat down on the ground and continued producing sand like this for a while.

Suddenly, the wind blew, and the sand got caught on my face.

I spat out the sand from my mouth while wiping my face with my clothes.

Come to think of it, is the sand produced with magic any different from ordinary sand?
It’s not harmful, right?

While thinking it was fortunate that the sand didn’t get into my eyes, I used the item box as a countermeasure against the wind.

When I imagined activating the item box, a dark gray space opened in front of me.
Although I often used it as a trash can, this item box was my speciality that I used all the time.
I stuck out my hand toward the item box so the sand coming out from my palm could be sucked into it.

After 30 minutes producing the sand, my eyes became white and my head became blank, but I wasn’t feeling sleepy..
It must be the symptom of running out of mana.

When I took out all the sand from the item box, I made a sand pile about 30cm high.

「Umm….. I wonder if my mana bowl would expand if I repeat this every day」

For the time being, I made this place my secret practice area and practice here everyday.

After a week since I started mana bowl expansion training, It looked like the amount of sand that I could produce had slightly increased.

「Hoo, it seems onii-chan’s mana has increased steadily. Next, how about practicing a different attribute magic?」

Today, Nicola was watching the practice.
It was mentally hard for me to keep quiet while producing the sand, so I was glad to have someone to talk with now.

「Different attributes, huh? I used water magic to harden the sand though. So maybe fire? No, it’s too dangerous for now」

If I caused a fire while practicing, my family would be charged compensation for the damage, and I might get kicked out of the house…

「You’re right. For fire, just doing image training for now is enough I think. So, the other attributes are earth, wind, and water. Because you’re already practicing earth, how about wind? Or practice water more maybe?」

「Hmm, let’s seeー It’s maybe hard to imagine the wind, since we can’t see it. Maybe I’ll practice water more for noー」

I take back my words…
It seemed that the grumpy old man also existed in another world.