When I returned to the riverside, I saw the carpenters were skillfully building the bridge.

What passionate people.
Even though the bridge was destroyed many times, their passion for building things was still on fire.
Their level of proficiency was high.

Well then, to support them, I’ll do what they can’t do.

First of all, I had to make metal fittings required for assembling the bridge.

Because the bridge was destroyed many times, the wreckage was piled up.
I looked for some iron scraps that could be used as materials from the pile of wreckage.

After gathering the iron scraps, I picked up my giant hammer and twisted the head part of the hammer, then that part came off.

Guess what this is?
Yup. Actually that part was a simple anvil!
The surface was made of ‘gloren’ steel, which was harder than iron and less likely to get hot. 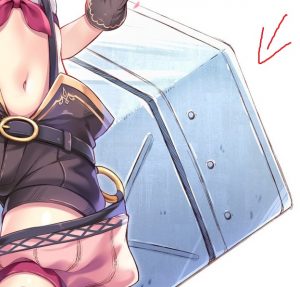 */perhaps she was talking about this part

Master designed my hammer to be like this so that I could smithing during my adventure.
What a wonderful creation!
Well, she gave me pressure by saying, “I’ll kill you if you drop your blacksmith skill during your adventure!” though.
Still, I’m really grateful to her for this wonderful hammer.

With the hammer heated by skill, I hit the iron scraps placed on the anvil.

After I hit it many times, the iron heated up and turned red.

Un. Iron is such a good metal.
As I hit it, it will make a nice sound and change into the shape I want.

I wonder if I hit rotten humans like Wise or the chairman, their personality will also change like this iron.

「Aaahh! Yada yada! It irritates me!」

I borrowed Rozelia’s favorite word and hit the iron hard and quickly to relieve this unpleasant feeling.

Too focused on hitting the iron, I was surprised by the voice behind me and made a weird shout.

There was Galle-chan standing behind me.
She wasn’t full of energy like earlier so I didn’t feel her presence.

「I’m sorry for calling you to an unpleasant place… 」

Yes. The one who made me mad was that baldy old man!
How could he treat his own daughter so badly!
I would never forgive him!

「…..By the way, why are you hitting iron? If you want to change the shape of a metal, don’t you have to melt it?」

She looked confused with what I was doing.

Well, if you’re not familiar with blacksmithing, you may not know why blacksmiths were hitting iron.

「By doing this, the quality of the iron will improve. Normally, iron contains too much carbon, so we need to remove it by hitting the iron」

「Galle-chan. If you’re being bullied by your father, I’ll help you. My motto as an adventurer is “helping those who are oppressed!”」

While I kept moving my hand, I made a suggestion to Galle-chan.

「Oh yeah! How about you come with me to Tiaret after the bridge is fixed? I’m sure it’ll be fun!」

「But, the bridge will be destroyed again…」

「Don’t worry. The bridge won’t be destroyed this time. You know why? Because I am here!」

I made a cool pose and expression that might be lame for other people to see.
But it looked like Galle-chan liked it.

「Hooー Hanna-san, you’re not only a genius as a carpenter, but you’re also strong, aren’t you? You also dared to talk back to Dad earlier. I really admire someone like you!」

「Galle-chan, you should also talk back to your father like, “you baldy!” or “you torch head!” or “you stark-naked head!”」
*/ Why torch head? Because bald head is shiny.

Woops. Calm down, Hanna!
You were just suggesting an innocent girl to mock his father’s physical appearance!

Galle-chan laughed a little, but immediately shook her head.

「Yays. I’m indebted to him for raising me」

Indebted for being raised, huh…

「You know? I was raised by an elf mother who has no blood connection with me, but I don’t think that I’m indebted to her… I’m grateful, of course. I’m just thinking the word “indebted” is not family-like」

「Well, that’s only my thinking」

It’s strange that I, who doesn’t have real parents, talk about the parent-child relationship to her, but I still think that what Galle-chan said was weird.

「Indeed that the supervisor feeds you, but Galle-chan, you have the power to heal everyone here by just being with them, you know? Because of you, everyone can do their best working here. The one who should be indebted was the supervisor, not you. He should be indebted to you for making the carpenters want to stay here and work. If I were Galle-chan’s mother, I have confidence that I would take good care of you」

「Ahaha. I’m glad you said that even if you were just kidding. If I were Hanna-san’s daughter, I’m sure it would be fun!」

Galle-chan smiled as she said that.

Ahh~ So cute!
I want her to be my daughter right now!

「Ga, Galle-chan… Would you like to call me “mama”? Just this once, please!」

Her cuteness made me make such a weird request.

I, I’m not a pervert! It’s Galle-chan’s fault because she’s too cute!

Galle-chan jumped into my chest.

Wow! I didn’t request this much but, thank you very much!

But, when I got excited like that, I heard a sobbing sound from my chest.
I looked into Galle-chan’s face. She was crying a little.

While stroking Galle-chan’s head, I renewed my determination.

I won’t only protect the Ludley Bridge, I’ll also protect this girl’s smile!