Hello guys, I’m sorry for making you wait for more than a month. If you want to know what happened to our site, you can read the announcement on the front page. Anyway, I hope you enjoy the chapters /’o’)/

Nicola suddenly took off all of her clothes, and right away, two strips of light appeared, covering her chest and crotch.

I see. This is Nicola’s light magic. It’s called,【It Will Disappear On Blu-ray】!

*/ ＢＤでは消えます (It will disappear on blu-ray) refers to god rays or light that censors naked bodies in non blu-ray animes. Nicola used this magic in chapter 58. 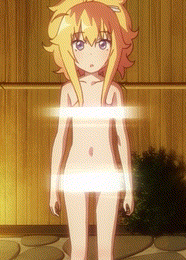 「I’ll cast this magic on you, so you don’t need to worry!」(Nicola)

「The bath Onii-chan made is amazing, you know! Your skin will become smooth and shiny. You will be even more cute!」(Nicola)

After Nicola declared that, Pamella glanced at me.

「We, Well then… I will join you guys…」(Pamella)

Pamella answered with a low voice. She looked nervous somehow.

Nicola nodded to Pamella with a satisfied face and cast her light magic on Pamella.

After that she looked at me and grinned.

『See? If you said you didn’t want to join, she might think that you hate her.』(Nicola)

『Of course! Now you should respect her courage and take a bath with us!』(Mark)

Well, as long as Nicola’s light magic covers Pamella’s most precious body parts, she will look as if she’s wearing a shining bikini, so I think it’s okay.

Besides, I made the bathtub a little large, so it will be like a heated pool.

「Nicola, can you cast your light magic on me too?」(Mark)

Nicola swirled her index finger twice and pointed at me.

And then two strips of light appeared and covered my body.

I took off my clothes and looked at my body.

Certainly the light is covering my body, but I don’t need two strips of light, I just need one…

『Well, this magic is only for girls, so I can’t remove the one on your chest, but I can do this..…. Phu,!』(Nicola)

She turned the strip of light on my chest into two heart-shaped lights that covered both of my nipples.

I know she’s lying that she can’t remove it, but… whatever…

While Nicola and I were talking with telepathy, Pamella finished taking off her clothes.

She hugged her clothes, trying to cover her body, even though her body was already covered with two strips of light.

Well, even though these lights are covering our body, the feeling of being naked doesn’t go away.

I made a shelf in a corner of the bathhouse with earth magic.

「Pamella, you can put your clothes here.」(Mark)

After she put her clothes on the shelf, Pamella hid her chest and her crotch with her hands.

Her face became even more red.

「Don’t worry, I can’t see them. I’m going to pour hot water but I don’t know how much water we need, so can you sit down in the bathtub?」(Mark)

Pamella nodded and went inside the empty bathtub.

I stretched my right arm forward, activated water magic and fire magic at the same time, and began to pour hot water on Pamella’s shoulders.

Pamella’s long dark blue hair was swaying along with the hot water that was flowing down her back.

I began pouring hot water on Nicola’s shoulders too with my left hand.

So this is what it feels like to be a shower, huh…

After the water level almost reached Pamella and Nicola’s shoulder, I stopped pouring the water and got into the bathtub.

「Mark-kun, you are so amazing to be able to create water this much…」(Pamella)

While saying that, Pamella stuck out her index finger and sprouted water with magic.

「I wonder if my mom is also able to create this much water.」(Pamella)

I didn’t know how good Camilla was at magic, so I couldn’t say anything.

Come to think of it, I’ve heard from Celine that she could only fill about half of a small barrel with water using water magic when she was little.

I wonder how much water she could create now.

While thinking like that, I took out ten E-grade potions from my item box and poured them on the bathtub.

「Potions. It’s good for your body.」(Mark)

Pamella didn’t seem to understand what these potions were.

She would definitely be surprised if I told her that these potions were worth 10 gold coins.

Anyway, the potion bath is ready.

The three of us enjoyed the bath while looking at the night sky.

Taking a bath after a day of working hard feels really good.

I can tell the fatigue disappears from my body.

After a while of enjoying the bath quietly, I suddenly became curious about Nicola because she has been silent for a while.

When I turned my face toward her, I saw her staring at Pamella’s chest.

It looks like the flow of mana or something.

Nicola replied to me without looking at me.

『I’m now looking at Pamella’s chest with【Censor Remover】magic which allows me to see through the light of my light magic that is covering Pamella’s body. So basically, I’m looking at her naked body right now.』(Nicola)

『Hahh… Onii-chan, you don’t understand. This is different. Pamella-chan’s ‘immature fruits’ have a different charm from that of adult women!』(Nicola)

Saying that, Nicola snorted and clasped her hand while still looking at Pamella’s chest.

Pamella didn’t realize because she was closing her eyes, enjoying the bath to the fullest.

『I wonder how she will react if I tell her that I’ve been staring at her naked body. Well, I won’t say anything though. But I somehow can imagine her cute embarrassed face!』(Nicola)

What is she talking about?

Pamella was too careless.

She is now spreading her legs and arms, making the letter of 大 (dai) with her body.

It was unlikely to come from a shy girl like her. It made me a little worried.

「Pamella, does the bath feel good?」(Mark)

Hmm… Looks like a potion bath is too stimulating for Pamella…