「”Camilla onee-san”? Fufu. I’m not that young to be called like that, so Mark-chan, you can call me ‘Camilla-san’ or ‘Camilla-mama’. So… Are you sure you can renovate this rooftop?」(Camilla)

When Camilla asked me, Gill oji-san answered her in my stead.

「You don’t need to worry. Mark-boy is a professional in renovating things.」(Gill)

She still didn’t seem to understand what I’m going to do, but it would be faster for her to understand if she just watched me doing it rather than me explaining it after all, so I didn’t say anything and started looking around the rooftop once more.

「I will reinforce the floor first.」(Mark)

Gill oji-san asked me to fix the fences, but I decided to make the floor stronger first.

People will gather here on the rooftop, so it would be bad if it suddenly collapsed.

Well, the one who will drink on the rooftop are soldiers who can’t get hurt so easily, but I feel like I have to do this just in case.

I don’t think I can be satisfied with just making it strong enough to support the weight of a hundred adults like a certain storage commercial.
I need to make it stronger than that.

*/Mark is talking about “Inaba Storage”, a company with products such as portable storage, outdoor storage, storage box, ect. 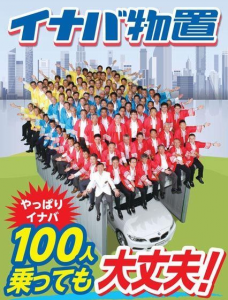 I crawled like a baby around the rooftop while injecting my mana to the floor to make it stronger.

It took me about ten minutes to inject my mana to the floor entirely.
I’m sure the floor is way stronger now.

The look of the floor hasn’t changed much, it just looks a bit more glossy now.

Camilla was just watching me while tilting her head.
She didn’t seem to realize that I just reinforced the floor.

Since this is a hostess bar, I don’t think people would move around while drinking, but even so, I’d like to make the fences at least 1.5 meters high just in case.

I made cylinders with a diameter of 10cm and a height of 1.5m with earth magic and arranged them at regular intervals of 20cm along the old fences, and then I made the rail on top of the cylinders to connect them all.

Now the fences are completed.

By the way, the old fences are like mini walls while the new ones are cylinders or bars, so they didn’t look weird even though they were lined together.

After that, I walked along the fences, and took a breather after confirming that they were good and strong.

「Gill-san… I’ve seen carpenters using earth magic to fix a broken house and they did it slowly, but Mark-chan did it so quickly. Will it be all right?」(Camilla)

Umm… It seems that Camilla doubts the power of my earth magic.

「Gill oji-san, can you kick this fence to see how strong it is?」(Mark)

As soon as he said that, Gill oji-san walked to the edge of the rooftop.

He then dashed to the other edge at full speed and kicked the fence really hard.

A loud impact sound echoed, but the fence didn’t move at all.

It was as steady as a solid rock.

Gill oji-san and I looked at Camilla and grinned at the same time.

Camilla smiled and raised her hands, making a pose of surrender.

I put my hands on my waist and nodded in satisfaction.

But to be honest, I was a little panicked when I saw Gill oji-san dashed from the edge.

Well, I’m happy that he trusts my magic ability so much, but, come on, did you even need to kick that hard?

「Hmm… Anyway, try to make one and let Camilla decide.」(Gill)

I nodded at Gill oji-san and decided to make one table for now.

I recalled the shape of the table in the store area and tried to make a table with the same height.

I’m used to making tables and chairs so this is just a piece of cake for me.

In front of Camilla, a light brown table with slightly rounded corners was completed.

For now, I can only select a color that is similar to the original soil with a little bit of white, but I want to be able to select more colors in the future.

「What do you think? For the sofas, well, I can’t make a sofa with earth magic, so you need to prepare them yourself.」(Mark)

Camilla answered me with her mouth wide open while staring at the table.

And then, she shook her head several times, made a serious expression and crossed her arms.

She seemed to be starting to think seriously about the rooftop beer garden.

After that, Camilla and Gill oji-san started to talk about where they will get the sofas, how they will decorate the rooftop, ect.

When I was looking at them silently, Camilla turned to me.

「Ara, I’m sorry, Mark-chan. It must be boring watching two adults talking to each other… Oh, that’s right! Wait a minute, I’ll go call ‘her’ to play with you.」(Camilla)

Thinking that I was getting bored, Camilla said that and went down the stairs into her house that was next to the garden.

After a while, she returned with a girl.

The girl seemed to be the same age as meー No, wait. She looks a little taller than me, so she may be older than me.

She looked like Camilla and had the same bluish hair as her.

「This is my daughter, Pamella. She’s a little shy, but I hope you can get along with her.」(Camilla)

When her eyes met mine, she immediately looked down shyly.