In our room, I spread my legs to the width of my shoulders, stretched my arms up, put my palms together, and stood, making a shape of letter A.

「What are you doing….. Marcus onii-chan?」

In the same children’s room, there was a lovely little girl, who had grown out her beautiful blonde hair to the shoulders.
She was Nicola.
Her face looked similar to when she was an angel.
Or maybe not? I could only remember what happened in heaven as if it was a dream.

And I, Yoshida Masaru, was given a name as Marcus in this world.
We were not a noble so we had no surname.

「This is a pose to circulate mana around my body, and then expand the mana bowl wider. An uncle adventurer who was staying here taught me」

「Ahh, a man with a long nose? He indeed looked like a man of dignity, didn’t he? And? Is that pose really worked?」

I was five years old.
My body had quite grown, and I was old enough to play around the neighborhood.
I had decided to start doing what I can for a bright future in this world.

Because this was the world of sword and magic, for now I would like to try using magic.
That’s why, I asked an adventurer, who was staying at our inn until yesterday, to teach me how to increase mana in my body.

「I don’t know. But there’s no textbook about magic in our house, so there’s nothing else I can do」

「Why don’t you ask me? You know my boss struck the knowledge of this world into my head, right? And I will say your mana won’t increase just by doing that weird pose, you know?」

「Eehh!? Really? That uncle adventurer! He said, “There’s no shortcut in magic. You may think it doesn’t have effect right now, but your efforts will definitely pay off someday”. He said that as if he was a great adventurer!」

「Haahh….. The effective ways to increase mana haven’t spread to the general public yet in the first place. People just came up with their own training method, or were taught by others. Some of the methods may be effective in their own way. So if that uncle adventurer thought that pose was effective, it probably was, but……..in his own head」

Said Nicola with a smirk on her face as if she felt smart.

「That’s how it works? I see, so that uncle adventurer didn’t mean to lie to me, huh. Come to think of it, in the previous world, there were various diet methods, health methods and stuff. I see… so this case was similar to that, huh」

I let go of the pose I made as closely resembling the letter A.
I felt a little embarrassed now.
Nicola seemed to be grinning, holding a laughter.

「Marcus onii-chan, why do you want to expand your mana bowl in the first place?」

「Mana is the source of magical power, right? Like ‘MP’ in the game. Wouldn’t it be better if I have a lot? That uncle also said by expanding the mana bowl, you’ll be able to use magic more often」

She teased me by emphasizing ‘A’ pose.
I knew it stupid!
I felt really embarrassed now.

「So, why did that uncle think mana bowl will expand by doing that stupid thing?」

「Mana bowl will expand as we grow, you know? So maybe he was just under a misapprehension」

「So MP will increase as we grow, huh. If that’s so, we can’t expand it by training then」

「No, no. You can. You do it by continuing to use your mana as much as possible until it’s depleted. And to make up for the lack of mana, the bowl will expand little by little. It would be more effective to train it when you’re a child like now, because the bowl is softer at a young age」

「Heeー So training since we’re childs is important after all. In the previous world, most of the top athletes also received talent education since childhood. I see…. Yosh! I’ll be the crybaby Ha-chan!*」

*/TL note : Crybaby Ha-chan / 泣き虫ハァちゃん is a novel that tells about the growth of a crybaby boy into a strong person.

「Well, do you best~ Whatever you do in the future, you will have no problem with mana. And then get life, earn a lot of money, and work hard to provide for me」

Huh? What’s she talking about?
I wanted to aim for a comfortable life where I can earn a decent amount of money and rest decently though.

When I was talking to Nicola, the door suddenly opened.

「Just when I thought I heard someone talking, there you two were still upstairs. I was making a new menu, wanna come down and taste it?」

Nicola made an angelic smile, ran toward the woman who opened the door, and clung to her waist.
She was our mother, Leona-kaasan.
A beautiful woman with a fluffy atmosphere.
Young guests were constantly hitting on her, but of course she always refused them.

「Ara ara, Nicola, you such a spoiled little girl. Alright, I’ll carry you, so let’s go down the stairs together」

Nicola answered cheerfully with an angelic cute smile on her face.

You might have a guess now.
Yes… Nicola was quiet and cool in front of me, but she would act cute and spoiled in front of other people.
She said, it was for the sake of living comfortably in this world.

Well, I sometimes tried to behave like a child in front of the neighbor’s aunties.
But, it was impossible for me to go that far.
Nicola, what a terrifying girl!*

*/ “What a terrifying child” / “osoroshii ko!” / “恐ろしい子!” is pretty much a pose of a shock when a character has realized the terrifying capability of somebody.
This meme originated from shoujo manga, “Glass Mask”. 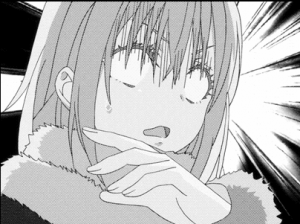