Chapter 117 : Versus The Lord Of The Lake

I turned toward the lord of the lake. It is still attacking my light ball with its tentacles. The ground under my light ball has been messed up by the impact of the huge tentacles.

I was standing quite far away so I didn’t think those tentacles could reach me, but to be safe I decided to step back a bit further.

Geez. This good-for-nothing angel is not helping at all.

The lord didn’t even care when I was taking a few steps back.

Alright, now I should attack it while it’s still focusing on my light ball. I think its weakness is the same as the normal Tentacles which is the forehead.

I aimed for its forehead and shot nine stone bullets with all my strength.

After I heard a sound like a big hammer hitting a thick old tire several times, I saw the lord’s body shake violently by the impact.

It looked like I successfully hit its forehead, but my stone bullets didn’t penetrate its bodyー No, they didn’t even scratch it.

Are you kidding me? Is it because its soft body absorbed all the impact? But my stone bullets are small, so… not only does it have a soft body, but also thick skin?

After receiving the impact from my stone bullets, the lord stopped attacking my light ball and was stunned.

Alright, this is my chance to attack it again!

This time I created nine slightly bigger stone bullets and transformed them into small spears.

Nine lance bullets flew at a high speed toward the lord’s forehead along with a wind noise.

As intended, my lance bullets hit the lord’s forehead, but they didn’t seem to have caused any damage to the lord.

My lance bullets just shallowly stabbed its forehead, and it became like a “kenzan” now. 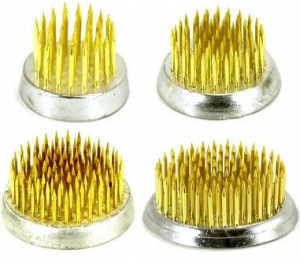 */Kenzan or needle point holder is a tool for arranging flowers

Oh? It’s screaming. It looks like it did receive some damage.

The lord moved its big yellow muddy eyes and finally looked at me.

It wiped off the lance bullets on its forehead with its tentacle and started violently hitting the surface of the water around.

It’s terrifying but I need to keep attacking it!

I started shooting stone bullets and lance bullets alternately, aiming for its forehead. However, this time the lord covered its forehead with its big tentacles. Apparently, it has some intelligence.

All my bullets hit its tentacles. However, my stone bullets were all deflected while my lance bullets only stabbed it a little.

Dammit! Its skin is so thick!

I kept shooting stone bullets and lance bullets, but it continued guarding its forehead with its tentacles.

I can’t aim for its forehead if it keeps guarding it. What should I do?

Should I keep shooting until I destroy all its tentacles…? No, I don’t think I can do that. Its skin is too thick. I will definitely exhaust all my mana before I manage to do that. After all, it has 10 big tentacles with thick skin.

Moreover… I have one more concern…

The boss said that the lord wouldn’t go up here to the shore, but honestly, I doubt it.

It surprisingly has intelligence to the level where it spontaneously guards its weak spot, so I think the lord can go up to the shore anytime it wants. If that’s true, it would be dangerous if it suddenly rushes at me then.

Just in case, I started creating multiple walls about 3 meters tall on the coast.

However, right after I started creating the walls, the lord suddenly rushed over here, but luckily, I managed to finish the walls faster, so the lord hit its body against the wall as it rushed.

Wow, that was close!

「Boss-san! The lord is coming for me! You said it won’t come out of the lake!」(Mark)

I looked at the boss fisherman who was watching from a safeplace and complained to him.

The boss then replied to me with a confused face.

「But it never came out of the lake! I swear! Perhaps it’s coming out now because you made it angry! No one in this village can hurt the lord like you after all!」(the boss)

Oi, seriously? The fact that it won’t come out of the lake is my only peace of mind, but that fact now turns out to be wrong. Aahh! This is bad!

At this rate, it will eventually break through my walls! What’s worse is I can’t kill it because it keeps guarding its forehead with its tentacles!

Should I just try to continue attacking it until I exhaust all my mana? Maybe I could destroy all its tentacles before I run out of mana… Maybe…

Or… should I just give up and ask Celine for help before I get seriously injured…?

When I was thinking while expanding the stone walls just in case, Nicola sent a telepathic message with a relaxed voice.

『Can’t you see I’m on the verge of life and death here!? I want to kill it but its skin is freaking thick. Can I just give up?』(Mark)

『Hahh, you’re so hopeless… Look at that monster. Normally, a boss monster like that is extremely delicious. Ah, but it indeed has a thick skin, so Onii-chan, you have to be the one to cut it before we eat it.』(Nicola)

『Stop talking as if you’re sure I’m gonna win! It will be a death flag for me!』(Mark)

『But what I said is true, right? There’s no one in this village except you who can cut that monster’s thick skin.』(Nicola)

『Well, you may be right. If I manage to kill it and we are going to eat it, I can cut it with my….. Aa!』(Mark)

I turned my face and looked at Nicola who was in a safe place with Celine.

She was folding her arms while looking at me with a smug face as if saying, “Looks like you have noticed it”.

Hahh… If she wanted to give me a clue, then why didn’t she just tell me immediately!? Can’t she see that I’m in danger right now!?

Oh, well… She’s annoying but thanks to her, now I know how to defeat this monster.